Let It Snow, Let It Slow 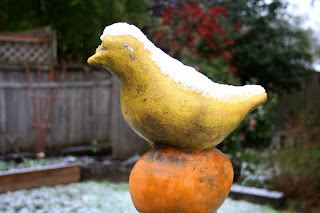 Mother Nature threw me an unexpected gift this week: an enforced slowdown. The Wintry Mix that has coated the roads kept me out of the car the past three days. After 15 years in the temperate valley (and near a decade in SE Texas before that), I no longer trust my ice maneuvering.Walking was no easy feat either. I opted for the grass when possible, avoiding the glazed sidewalks. Still, it was a very slow and careful stroll . I had to look at the ground, I had to go slow, I had to shut up the Chattering Monkey and concentrate on one foot in front of the other. I noticed things I never would have seen at my usual break-neck pace: rabbit tracks in the snow, the colors in the ice. I arrived each day relaxed and happy, grateful for things I ordinarily don't think about: heat in my office. Gloves. Making it across Monroe street without falling down. My 20 year old boots, still waterproofed after all.There's lots going on in the world right now to scare us. I've stopped using my clock radio to wake up, tired of the daily litany of economic horror stories. I don't deny the very real hardships, but I find that slowing down and being grateful for what ISN'T broken keeps the fear weasel from the door, and increases happiness. Research supports that. What we feed, grows. A replicated study found that people who kept a daily gratitude journal for 6 weeks not only were happier at the end of that period than the control group, but remained so six months later-- even when they were no longer keeping the journal. It's a simple but profound notion: we find what we look for in the world.
Posted by Jana Svoboda, LCSW at 10:09 PM