Sticking to-- or getting stuck in-- your story 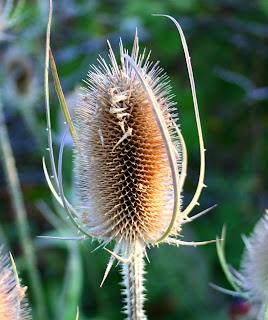 Most of you have heard the story of the three blind men coming upon an elephant in the jungle.  Each reaches out to touch a different part.  One grabs a leg and says, "We must have arrived at the pillars of the great Such-and-Such Temple."  Another, hitting the side, says, "Oh no, it's the Wall of Nazar."  The third, grabbing the tail-- who knows what he thought.

Our story about what we experience isn't reality, but the beliefs or understanding of our experience about it.  As someone more succinct said:  Don't confuse the map with the road.   I used to give a talk about this concept, and for illustration would show three maps of Portland.  One, a  topographic map, showed contours illustrating changes in elevation and landscape.  Another showed physical features-- rivers, forests, etc.  The third was a street map.  All were "true" stories of Portland-- but which would serve you better if you were trying to get to Powells?

How attached are you to your current story?  And is it getting you where you want to go?

We all have  stories about ourselves and our experience.  Sometimes our stories serve us, other times they can constrain us. And the more we hear any story-- even when we are telling it to ourselves-- the more likely we are to believe it, to internalize it.

No child is born believing they are worthless, terrible, stupid.  But a child who hears it often enough will believe it.  And we all grow up in a consumer economy that survives by telling us we are not enough-- how else to sell us things we don't need?  We have to be convinced us we are lacking.

Milton Erickson, a gifted psychiatrist, often helped clients create positive stories about their worth via hypnosis.  He would even invent a kindly aunt or teacher for adults who as children had no safe role models. His unique inventions of new stories had real-life benefits:  the patients began seeing themselves through healing, affirming reflections.

Quote of the day:  The destiny of the world is determined less by the battles that are lost and won than by the stories it loves and believes in. —Harold Goddard
(This was the headliner quote on a great page:  See the rest here at Storyteller.net)
Posted by Jana Svoboda, LCSW at 9:23 PM

I certainly hope you intend to collect these in a book. You've illustrated to me several times that things do not need to be overwhelmingly complex to be profound; in fact the most profound ideas seem to be the simplest.