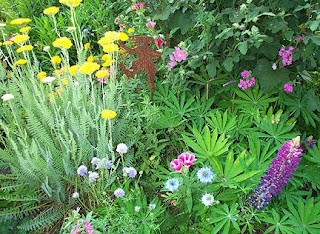 I hauled the big Red Book to work today.  In case you aren't familiar, this weighty tome is a facsimile and translation of Carl Jung's personal journal, replete with luminous, hallucinatory paintings of dreams illustrating his Hero's Journey.  Access a great NYTimes article on its publication here:  The Holy Grail of the Unconscious, by Sara Corbett.

Jung broke ranks with his analytic companions, chiefly Freud, when he took a less medical/pathological turn into decidedly theosophical territory with his writings and analysis.  He saw the unconscious as a repository for a wealth of material to be mined for a more wholly realized life.  Access could be gained through art, writing, dreams, myths-- all were sources of soul.

This morning before starting my day's work I opened to this passage:  "Wondrous things came nearer.  I called my soul and asked her to dive down into the floods, whose distant roaring I could hear...and thus she plunged into the darkness like a shot, and from the depths she called out:  'Will you accept what I bring?' "  In the dream, soul returns first with the detritus of war, next the remnants of historical magics and superstitions, then the horrors of which humanity has shown itself capable, and "fear, whole mountains of fear".  Each in turn Jung accepts, saying "I accept all, how should I dismiss anything?" But when soul comes back from the depths with the wisdom and treasure of all past cultures, he is overwhelmed.  "That is an entire world, whose extent I cannot grasp; how can I accept it?  Soul chastizes him sharply.  "But you wanted to accept everything?  You do not know your limits.  Can you not limit yourself?"  From this, Jung seems to face his grasping and lack of discernment.  He writes:  "I see that it is not worth conquering a larger piece of the immeasurable...A well tended small garden is better than an untended large one."  (Page305-306, Red Book, Carl Jung, edited by Sono Shamdasani, translated by S. Shamdasani, M. Kyburz and J. Peck, published by Norton 10/2009)

Plunging into the collective unconscious, or even dipping our toes in our personal subconscious, can be a frightening task.  In America, we do a good job of avoiding it.  We keep ourselves crazy busy, fortressed in stuff, cut off from nature, each other, and our own soul.  We feel a vague or real sense of dis-ease, or sometimes terror, and we run in absolutely the wrong direction in hopes of comfort.

When I was a child
I caught a fleeting glimpse
Out of the corner of my eye.
I turned to look but it was gone
I cannot put my finger on it now
The child is grown,
The dream is gone.
but I have become comfortably numb."
"Comfortably Numb" , Pink Floyd, The Wall, 1979

It's true, as the country folks say, that if you beat enough bushes you are going to drive out some snakes.
But with compassion and what Jung spoke of as modesty and cultivation, there is much to be had by digging a bit deeper.  Our lives go by more quickly than we imagine.  We find the things we worried about so much in a moment are nothing in the bigger picture.   And what we put off-- as I said once to a client, well you can deal with it now and there will be hell to pay.  But if you put it off-- it's hell to pay, plus interest.

What little piece of your garden has been neglected too long?  What waits for you there?

Today's quote:  It is by going down into the abyss that we recover the treasures of life. Where you stumble, there lies your treasure.  Joseph Campbell