And now we pause to travel through space and time... 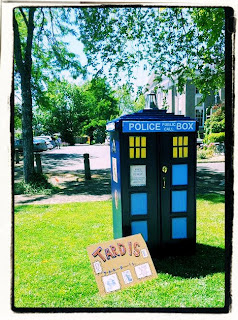 Blogging has slowed while summer is celebrated, with lots of family visiting and a time machine to build for Da Vinci days. If you're traveling through the Corvallis dimension, look for the TARDIS as it floats about the festival.
Posted by Jana Svoboda, LCSW at 11:21 PM No comments: Links to this post

Stuck in a (Bad) Story: PTSD

Been down this road so long...
Post Traumatic Stress Disorder (PTSD) is a type of anxiety disorder (see last blog). Ten years ago the average Joe wouldn't know much about it, but it gets a lot more media now. Not that it's new: our brains have done a fab job of storing terror for millennium. It's a survival mechanism. If something life-threatening (or deemed to be-- the brain can't take the time to differentiate) happens, the brain will store away details to recognize the danger should aspects of it reoccur. When it perceives those details again, a quick chemical spill often occurs: adrenaline, cortisol, and a slew of other bio-goodies. Adrenaline helps you run faster, be stronger-- have any of you heard the tales of mothers lifting cars off trapped children? Cortisol (in the short run) releases glucose for energy, reduces pain perception, and increases memory. Both of these are good in a crisis. And ideally, these compounds will get used up in your flight or fight reaction. Should the situation never recur, and the brain "understand" the threat as a one-time deal, you're ok. But often the storage system isn't quite that selective. Here's an example:

Let's say you are walking downtown on a beautiful July morning when, just like in all those old Three Stooges movies, you look up to see a piano being lifted by rope to a third story apartment. Say you look up just in time to notice the piano and think "Gosh, hope I sure hope that rope's secure." And that in that split-second or two, you see the fraying of the rope, and the swaying of the piano, and the next thing you know you are lying on the sidewalk surrounded by ebony and ivories.

We're going to make this an easy one. It's your mostly-lucky day, and you walk off with a sprained pinky and a few scrapes. But Brain doesn't know that. It was way ahead of you. You could've been flattened! And it knows it. Logic knows something else: you're basically fine. You hardly ever use that pinky and it will heal pretty quick. With the exception of the loss of thirty minutes to recover over a latte', nothing in your life has changed.

Except good old Brain. Maybe now every time you see a piano your heart starts to race. Going downtown has the same effect. July makes you sweatier than it should in the Northwest. Or it could be, because Logic had such good intervention in your near-death experience, that those things don't get you-- but really discordant piano music puts you in an unexpected panic attack.

In the last blog, I talked about a Viet Nam vet who had a physical flashback after unexpected exposure to a popcorn popper that sounded exactly like rear machine gun fire. Most of the time Brain does a good job of knowing when it really needs to worry, so the one-time freak accident that results in no real physical harm pretty quickly loses its punch. But when the trauma is repeated, the peril real, or when other factors such as threat to one's children is involved, Brain solidifes the information and Logic can't budge it.

Because of the developmental differences of children, their brains are even more likely to store information in ways that prove troublesome when resources and circumstances change. Early exposure or experience of abuse can cause serious problems with hypervigilance (constant alert for danger even when none has been around for a long time) and chronic anxiety even as an adult. That's because the adult body is wired around the child's experience and capabilities-- at a time when the child had few resources to resolve the threat or escape.

Symptoms of PTSD include a hypersensitivity for stimuli related to the event (like the piano in the previous example), avoidance of such stimuli, and re-experiencing of the trauma when the stimuli is encountered, such as in flashbacks or panic attacks. Some folks have a paradoxical reaction of numbing out rather than "activating" when exposed to a traumatic reminder-- the freeze, rather than fight or flight response.

The main thing to remember, if you have symptoms of PTSD, is that you are not crazy. It's a predictable response to an unpredictable event. If the activacting stimuli themselves are not dangerous (like a piano), then repeated reexposure is the best bet for convincing Brain to settle down and quit seeing it as a threat. Several years ago my family had a traumatic event in which one factor was breaking glass. I had never had a panic attack in my life prior to that, though I'd treated people with them for years. I learned a lot about compassion for sufferers of same when for a while thereafter I had panic attacks whenever I heard breaking glass. Lucky (?) for me, I am far sighted in one eye and near sighted in the other, which means I have the depth perception of Mr. Magoo and am just as clumsy. I break things pretty routinely. Within a year or two my body/brain settled down and instead of thinking lives were in danger at the sound of breaking glass, I'd just curse my clumsiness again.

EDMR is another research based treatment for addressing PTSD. I'm not trained in it, but there are several folks in this small town, so likely some in yours too.

Cognitive Behavioral Therapy has a good track record with PTSD and focuses mostly on re-exposure and correcting illogical thinking around the event.

Emotional Field Therapy is a less researched but self-teachable method that employs many of the same ideas as EDMR. Many swear by it, and you can do it by yourself with probably little risk (some people might want/need support of another to confront scary material).

Recreation of the event through debriefing is a bit more controversial. For some, it's re-traumatizing. But many find it very helpful to process their experiences, especially if they are unique, with others who have been through the same. Groups for survivors of domestic violence, sexual abuse, or war are available in most towns-- check the web or ask me if you can't locate them.

Quote of the day: The wish for healing has always been half of health. --L.A. Seneca

Vid of the day: Willy Porter's BREATHE. A fan download,but if you can make out the words, it's worth it. Better yet, go buy the single (or the whole CD) at your local independent store or from his site.


As noted, next blog will talk about techniques for managing anxiety in general. The material will apply to those with PTSD as well.
Posted by Jana Svoboda, LCSW at 8:11 PM No comments: Links to this post