Someone articulate said something about how we humans are caught in the crossfire of indolence and productivity.  I've crossed over to the dark side on that one, so here's an updated rerun on from two years ago, in tribute to the darkening nights and increase in phone calls we therapists get this time of year.  By the by, Costco has daylight simulators and light therapy boxes on sale this week.  Be sure to check  Dr. Jim Phelps' exceptional thorough discussion on research and information on light and depression. 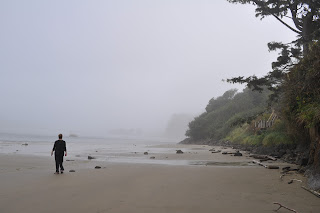 The days are darkening here in Corvallis, and it won't be long until what little slanty sun could shine will be thwarted by rain clouds. If you notice yourself getting sleepy, lethargic, or gloomy, you're in good company. Seasonal changes in light have a very real and physiologic effect on mood and energy. Our brains and bodies are set up by evolution to react to long light days with increased energy (work those fields! harvest!) and to cooler, dark days by slowing the system down (sleep! now sleep some more!). Our bodies would be perfectly happy going to bed not long after the sun sets. That probably worked well in days before widespread use of artificial light and 24/7 availability of food and things to do-- but it's unrealistic for most of us now. The result in the split between rapid societal evolution and much slower physiologic evolution can be sleep, energy and mood disorders, including the Oregon State Malady:  Seasonal Affective Disorder.

A light box can address both typical and more drastic results of the effects of waning light on the brain and body. Light boxes produce effects similar to sun exposure and can be used in the morning to assist in wakefulness and mood regulation and in the afternoon to increase energy. Exposure is typically between 15-30 minutes at a regular time each a.m. or early afternoon. To be effective, the light source should be at or above face level, with eyes open (although it is not necessary or recommended to look directly at the light)and within 15-30 inches of the light source. Specific instructions vary according to model. There is a great deal of evidence of effectiveness in the use of light boxes to treat seasonal affective disorder, a type of depression linked to low winter light.

Because they have a real--and sometimes profound-- effect, they are best used according to specific directives based on the particular mood or sleep issues one is experiencing. In some cases, use can increase hypomania (agitation, excess energy, and insomnia among other symptoms). Usually a reduction in the exposure time or moving exposure from am to afternoon  is enough to remedy that. However, I encourage persons considering light therapy to consult their physician or mental health practitioner and have some sort of system in place to track results. Because it isn't completely clear that such intense light exposure is safe over long periods for eyes, light therapy isn't for everyone and the risks as well as benefits should be explored.

I'm a chronically terrible sleeper, and an even worse waker. I noticed that the best sleep I have is when I am camping and rise and go to sleep with the summer sun. Since that time frame is typically also when I rise and wake in the winter, I have found great benefit in the use of a dusk/dawn simulator. The device I use attaches to my bedside lamp and is programmed to turn the (100 watt full spectrum) light down very gradually in the evening and then up again gradually in the morning. I use it from October to May and find I don't even need an alarm clock, as the dawning light creates a gentle alertness over time. I wake up refreshed instead of startled. Research suggests that gradual lightening stimulates a chemical cue to awakening, just as gradual darkness stimulates a chemical cue to drowsiness. I rarely use a light box since I've bought my dawn simulator. They aren't cheap-- mine was $150-- but I find it a bargain for the help it's provided me with sleep and waking.

Meanwhile, if it's a nice day, get out there!The average American is getting LESS than the 20 minutes of sun a day needed by the body to manufacture adequate vitamin D-- that's on a summer day.  In Corvallis, you'd need to be outside during 24 daylight hours to get that daily dose.  The USDA just doubled the RDA; if you are supplementing, they say go for D3 and 800 mg.  Harvard Health suggests 1000 and tells more about the importance of this vitamin, ways to get it, and effects for different populations in their newsletter here.

The Office of Dietary Supplements/National Institute of Health FACT SHEET on D.   There's a chart on getting vitamin D from diet.  Trust me, if you aren't taking cod liver oil or drinking a half-gallon of milk a day, you probably won't get it there.

Corvallis's own Linus Pauling Research Center is doing lots of research on D and are big proponents.  Find out what they are on about HERE.

Boston University reseacher and professor Dr. Michael Holick is considered one of the foremost researchers on D; he alerted a nation to links between D deficiency and increased autoimmune diseases and cancer.  He worries our obsession with sunlight protection in the form of sunblocks and clothing is causing a national deficiency.  Remember, no need to tan-- 20 minutes on hands and face in summer is plenty to produce all the D you need.

Quote of the day:  Albert Camus
To correct a natural indifference I was placed half-way between misery and the sun. Misery kept me from believing that all was well under the sun, and the sun taught me that history wasn't everything.

Song of the day (what else):

Posted by Jana Svoboda, LCSW at 9:44 PM No comments:

Important Message; Please Pass it On

The following is cut and pasted from the good works of Trevor Project:

Are you going through a difficult time?  Feeling confused, lonely or blue?  Call us!

Our trained counselors are ready 24/7 to talk to you.  If you’re a young person looking for someone to listen and understand without judgment or if you’re feeling suicidal, please call The Trevor Lifeline now at 866-488-7386. It’s free and confidential.  There is hope, there is help.   [U.S. CALLS ONLY]

Don't have access to a telephone?  Are you in a location where you are unable to talk?   Are you hearing impared?  Let's chat!

TrevorChat is a free, confidential, secure online messaging service that provides live help through this website.  TrevorChat is only intended to assist those who are not at risk for suicide.  It's available on Friday's between the hours of 1:00 PM Pacific (4 PM Eastern) and 9:00 PM Pacific (12:00 AM Eastern).  Connect with a volunteer who can support you with your concerns and questions.  [U.S. Residents only]  Click here on Friday's to see if an IM session is available.

There are plenty of ways for young people to get involved in spreading the word about The Trevor Project, whether you’re LGBTQ, a straight ally or anywhere in between! Youth are our most important advocates, and you can do a lot to be a “lifeguard” for your peers and create a safe, accepting environment for yourself and your friends.
Learn about the warning signs of suicide and what you can do to help a friend in crisis.
Visit and join TrevorSpace.org, TrevorSpace is a social networking site for lesbian, gay, bisexual, transgender and questioning youth ages 13 through 24 and their friends and allies. Join today!