Fixing a Hole Where the Rain Comes In 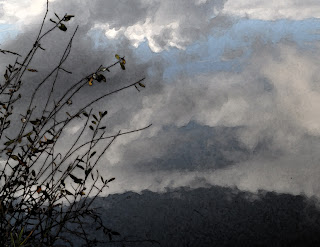 It's been some week here in the heart of the valley.  When I first moved here, I would clip choice selections from the Crime Watch column of the newspaper and send them to my folks:  "Zucchini thrown through window of home.  Both zucchini and window complete loss."  "Caller reported an unwrapped birthday cake had been placed in her mailbox."  Things haven't changed too much over the years.   Here's one from this fall:
THAT’LL CLEAR THE FLOOR: 3:11 a.m., Peacock, 125 S.W. Second St. The head of security reported that at about 2 a.m., someone set off a “stink bomb” on the upstairs dance floor, clearing the bar and alarming customers. The “bomb” was foul-smelling oil wrapped in foil, with “Fart Bag” written on the outside.

But this week, our town received national attention when an Oregon State student was accused of plotting a bombing at a crowded Portland holiday gathering.  A 19 year old US citizen of Somalia birth,  Mohamed Osman Mohamud allegedly wanted anyone attending the popular event "to leave either dead or injured" and expressed no concern about innocent children and others being hurt.  He has been branded a terrorist; and if reports of his attempts to ignite the bomb he thought was in place are true, he truly tried to earn that title.

But nearly as troubling are the comments on news websites from viewers, quick to leap on Mohamud's Moslem identity (and his immigration status).  Many readers immediately blamed the religion, saying Islam supports and encourages such actions. Within a day of the news breaking, our local mosque was hit by an arsonist.  Some of those same readers applauded this hate crime.

To be sure, some individuals use their religion to support violence and oppression of others.  But this is a bastardization of religious intent.  Mohamud is no more representative of Islam than Fred Phelps is of Christianity-- or Hannibal Lector is of meat eaters.
Every major religion has a variation of the golden rule:  Do unto others as you would have them do unto you; and want not for another something you would not want for yourself.

The Bible tells us: "There is no fear in love; but perfect love casts out fear, because fear involves punishment, and the one who fears is not perfected in love."  The Qu'ran specifically forbids any "compulsion toward religion" and invokes God as the perfection of Loving-Kindness.  Passages in either holy text can be cut and pasted to support individual perversions of the universal Law of Love and encourage violence of many kinds.
It's time we stand up for love, and each other.

If you are in or near Corvallis Tuesday, Nov. 30th, join our community in a vigil of love and against fear.

As Mahatma Ghandi said,  "An eye for an eye leaves everybody blind."