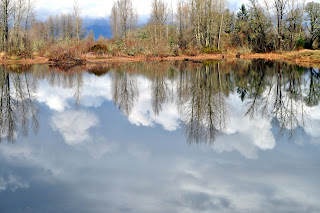 Beautiful day here in the heart of the valley.  Hiked Bald Hill in what should be the afternoon; ended up walking down at dark-thirty, making lots of noise so as  not to be cougar bait.  Later, stopped at the local LDS church, where the Community Nativity Festival was in the last hours of its three day run.  In its 16th year, the free event hosts over 600 creches made of everything from rolled up recycled newspaper to fine porcelain and metals. There were interpretations of the birth of Jesus from every country, and in some, the characters wore the clothing or had the facial features of the region of the artist.  Some of the creches were mass produced series, some handmade originals; each was meaningful enough to someone that it was purchased or given.  There were "Precious Moments" nativities and at least 4 (!) manger scenes in which every character was a snowperson,  There were even all frog and all dog scenes.  But no matter how serious, whimsical, downright silly or highfalutin' the creation, each seemed a message of adoration and unconditional love.

Some people have some pretty specific ideas about religion, and I am fine to let them have them. We do the best we can understanding big pictures with our individual, fully human minds.   I do believe strongly in the law that informs all faiths-- the law of love.

This week, I saw our town come together in love to support a faith community that was targeted by an arsonist.  The day before, a youth who had occasionally attended there had allegedly plotted a terrorist attack in Portland.  The local mosque and others in the Islam community quickly condemned his actions, pointing out  it was not in keeping with tenets of the faith.  However, many commenting online about the incident seemed to confuse the actions of the individual with all people of Muslim identity or from Islamic nations. Some called for expulsion of all immigrants; others accused all Muslims of violent intent.

I was glad to see that here in our town, hundreds turned out on a very cold and rainy night to show support and love for the hate crime against one of our own.  Rabbi Barnett spoke of the need to bring light of hope against fear and hate.  Quakers and other Christians prayed for peace and understanding.  Mohammed Siala, an imam at the Salman Alfarisi Islamic Center, thanked the crowd for coming from the warmth of their home to show the warmth of their hearts.  He asked all to release anger and to embrace love and compassion that could be “stronger and more powerful than the might of evil."

Let the bigness of love be stronger this season than fear.

I have at least that many kinds of love for you, sister. Thanks for another uplifting blog.

Big love back at you, sister. Aren't we lucky to do the work we do?