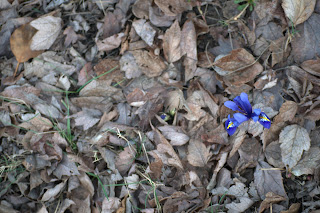 And then after a while, you forgot about it.

OK, depression is not much like losing a tooth.  The link here is the idea that when you pay a lot of attention to something, it occupies a lot of space in your mind.

You know those cartoons where someone stubs his toe so he bites his thumb?  It doesn't make much sense that adding pain could subtract from it.  But what's effective isn't the addition of a new pain, it's the distraction from the original one.  When we use a focused distraction, it's not that the pain isn't real.  It's that we are choosing to focus our minds and energies elsewhere.  This is part of the thinking behind all that complicated breathing they teach in Lamaze to control pain during childbirth.  There's some neuroscience and other physiology there too, but the simple part is:  it's hard to pay as much attention to pain when you are trying to remember all those patterns to the choo-choo breathes.

In the quirky and beautiful French film MicMacs, protagonist Bazil deals with his depression and PTSD by reciting obscure history facts to himself when triggered.  He's practicing a form of Cognitive Behavioral Therapy.  As the name implies, CBT aims to change thinking and actions from nonproductive or destructive patterns to those that support health.

When we are depressed, we ruminate-- obsessively mull over negative thoughts.  The original thoughts are spontaneous; we can't control them.  But by repeating them over and over in our mind we create neural bridges that strengthen them.  What we hear over and over (even from our own in-the-moment-distorted minds) seems believable.  At minimum, we wear a groove that we can now slide more easily down.  If you've ever studied music, think of it like chords or scales.  No one is born knowing how to play a C chord.   You learn it, and at first you have to think about it.  On the piano, C E G: white keys, each with a black between them.  If you've practiced them often enough, you can form the chord with your fingers even if the instrument is nowhere in sight.  If you now pretend to play a D chord, you know that middle finger moves up, to hit the black note in the middle of the chord.  You don't really even have to think about it.  After a while it becomes automatic.

Thoughts can be like this too.  We have a spontaneous thought, such as "Life sucks."  Let's say we don't know exactly why we are thinking it.  If we start ruminating about it, being the problem-solving and pattern seeking people we are, we can probably come up with some evidence to support the thought.  Because we are sorting for supportive evidence, we disregard or fail to look for exceptions to the thought.  After a while, the evidence we've selected comes easier to the fore.  After a longer while, it comes automatically.  And because it is so present, so pervasive...

One way to deal with depression is to question the thoughts and the narrative we use to support them.  As mentioned in a previous blog on Obsessive Compulsive Disorder, everyone has crazy thoughts.  The difference in folks with OCD is they pay attention to them.  Say you are driving down the street and you think, out of nowhere, "I could serve my car into that oncoming semi."  Who knows where that thought came from?  Maybe you saw a movie where it happened, or heard a news story, or maybe you just had a random "brain fart."  Most people who have that thought might be momentarily disturbed.  They think, "Where did that come from?"  But the next minute they resume thinking about the burrito they are off to get, or singing along to the radio.  People with OCD have a different reaction.  They think, "How could I think that?  What sort of monster am I?  Does that mean I want to do that?  What if I DID do that?  What if I can't control wanting to do that?"  They go over and over the scenario.  Maybe eventually they can't even drive, because they are afraid of having the thoughts or of acting on them.

In depression, minds can get sticky in a similar way.  Our task is not to control the original thought, but our responses to them.  We can do this in many ways.  Focused distraction--  intentionally turning the mind to something else-- is one.  Singing, paying attention to sensory detail, doing math-- it hardly matters what it is as long as it's a less harming thought.  See Managing the Monkey Mind for more on this.

As AA says, it's simple, but not easy.  Just like scales, learning a new skill takes time and lots and lots of practice.  If you have depression, you've had lots of practice in negative thinking and narratives that support why you feel so crappy.  And as noted in the last post, it's not that you aren't really feeling that crappy.  The point is the way you are addressing it can change, and that change can do you good.


CBT has been found to be as effective as antidepressants in alleviating depression.  Other CBT interventions and more on how it works coming up-- stay tuned!
Meanwhile, here's a positive thinking song from Gloria Gaynor:  dance it out.