It's a Small World After All: Our Brothers and Sisters in Japan 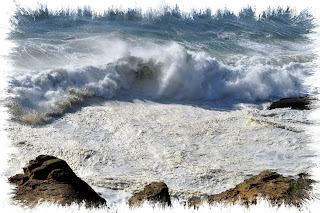 Friday a week ago I listened in sad silence to storyteller Alton Takiyama-Chung tell of Japanese Americans interred by our government during the war.  A week later I was surfing the internet following a lecture at university, checking up some references given by the speaker.  During the lecture I had noticed the screen shaking a few times, and wondered if the time if we'd had a small tremblor.  I remembered this as I was online and hit my bookmark for the USGS earthquake map.  It showed a massive 8.9 quake had just hit Japan.

At first I thought the site had been hacked.  Earthquake magnitudes are measured on the Richter scale, in which every 1 point value represents an increase of 10 times the amount of energy.  Michigan Tech's site for young seismographers gives this simple explanation:  "Think of it in terms of the energy released by explosives: a magnitude 1 seismic wave releases as much energy as blowing up 6 ounces of TNT. A magnitude 8 earthquake releases as much energy as detonating 6 million tons of TNT."  I'm thinking it must be hoax.  An 8.9 earthquake would be 700 times more powerful than the one that hit Haiti.

I switched to BBC, and watched in horror as the events of the earthquake and ensuing tsunami unfolded.  Unlike technologically poor Haiti, coverage of the destruction was immediate.  Hundreds of videos of the quake and the wave were posted, some as they were happening.  I couldn't turn away.  For hours.

I wrote an immediate email to the two Japanese highschoolers we had hosted from Tokyo a couple of years before.  I was relieved to get a response from Yasu a few hours later:


Good evening.
I’m sorry for delaying in my mail.
Damage in my country is more awful.
However, I do not have the problem.
Please relieve.
I was in the school during the earthquake.
So, I came home walking from there for three time.
But, the house is far and there is a friend who stayed at the school,too.
Thank you for worrying.
I want to meet again.
The next day, all the way here in America, one of Oregon's own was washed out to sea photographing the wave's arrival from Japan.

For Whom the Bell Tolls

No man is an island,
Entire of itself.
Each is a piece of the continent,
A part of the main.
If a clod be washed away by the sea,
Europe is the less.
As well as if a promontory were.
As well as if a manner of thine own
Or of thine friend's were.
Each man's death diminishes me,
For I am involved in mankind.
Therefore, send not to know
For whom the bell tolls,
It tolls for thee.

We are all connected.  No matter how different we seem or pretend to be, we connect in our ability to suffer and to care.  We are here to be here, to love and ease the paths of others and give meaning to our birth and life.

It is heartening to see the governments of China and Russia-- no friends, historically, to Japan-- sending relief and rescue crews to the stricken country.  Our own country, less than three generations ago locking up its citizens of Japanese heritage, is providing assistance and support in many ways.  We all live on one planet.  We are more alike than different.
You can help.  Donate to relief agencies such as AmeriCorps or Doctors Without Borders. Check out CharityNavigator.Org to find reputable sites.  Make your dollar count:  those cell phone donations cost more and take up to three months to process, since the agencies have to wait on the money from your paid bill.  Pay by check or directly by credit card to the agency.  Even a few dollars can make a difference.
Here's a video of Alton Chung performing a few minutes of his poignant story of a Japanese American soldier during WWII.
Posted by Jana Svoboda, LCSW at 11:40 PM