More Bytes on the Black Dog 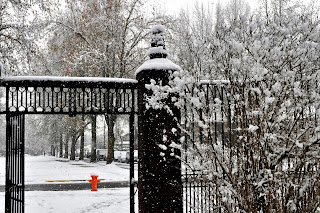 If you are one of the rare few that hasn't had at least a two-week case of the blues, it can be hard to fathom what it's like to be in the maw of what Churchill called his "Black Dog"-- a companion both familiar and dangerous.

Depression comes in all shapes and sizes.  There's dysthymia, a sort of a profound negativity and sour or melancholy disposition that's hung on for two years or more.  There's major depression, which can oddly enough be mild to severe, and in the latter form be accompanied by psychosis.  In kids, the chief symptom of depression can be irritability.  There's cyclothymia/bipolar two ("soft" bipolar) in which low moods alternate with normal or expanded ones.  Then there's Bipolar One-- what used to be called Manic-Depression, in which the highs can be WAY more damaging, accompanied as they often are with delusions of grandeur, paranoia, and really out of character behavior.  Read the last few days' infotainment news to see examples of a current celebrity demonstrating many of those symptoms.  (Note:  you can't diagnose based on news reports.  Said celeb may also be showing symptoms of heavy amphetamine use or even a brain/thyroid tumor.  But's he's doing a bang up job of illustrating the non-stop energy and grandiosity of someone in the throes of a manic illness).

The chief features of garden variety depression are the low moods, cognitive cloudiness, ruminations and withdrawal from activity.   Depression is a biological illness, not just a "thinking" problem.  (Don't forget-- your brain is IN your body).  Stomach issues are very common-- did you know your stomach is a second brain?  Other aches and pains increase as well.  Some of this may be strictly physiological, but some of it is an offshoot of the cognitive changes that occur when we are depressed, specifically ruminating thoughts.

Rumination means focusing too much on distress, its causes and its consequences.  Marni Jackson's book, "Pain: The Fifth Vital Sign," gives a vivid example.  The author is happily biking down a country path, enjoying the sun, the company, the ride, when she feels something hit her mouth.  Suddenly her world temporarily collapses into a very small place: she's been stung by a bee, and she's no longer thinking about the beautiful day, her family, the bike ride.  She's in pain, and that's all there is in the world for a time.

Depression is often like that.  A pain so intense, so overwhelming that it knocks the importance of everything else out.  Alternately, it can be a numbness that completely blocks the possibility of feeling joy.  In either case, the depressed mind mulls over and over the pain or numbness, searching for reasons and filling in the narrative with explanations of deservedness, hopelessness. helplessness-- the cognitive triad mentioned in the last post.

While loss and tragic circumstance can lead to depression, they aren't necessary as explanations.  Brilliant, beautiful, gifted and successful people suffer along with and sometimes as much as those who've been beset by real-life horrors.  Sometimes that can make it even harder.  "Why are you so miserable?  You have a wonderful (fill in the blank: spouse/career/job/family/life)".  Such statements are no more helpful than telling an amputee that s/he shouldn't have pain in an absent limb.  It doesn't matter whether it looks like there's a reason-- the pain is very real.  Blaming one for feeling it only makes it worse, adding guilt to the burden.

But like the amputee, the migraine sufferer or the victim of losses, intense focus on the pain does nothing helpful either.   One must find that strange balance between denial and indulgence-- acknowledging the pain, addressing it where possible, and bringing focused attention to something besides its insidious, hypnotic insistance that it is all that exists or matters.  Remembering that acceptance is not the same as approval, we can work on being a compassionate witness to our emotional state instead of consumed by it,