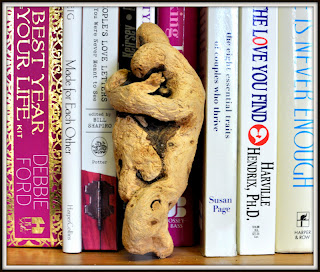 Thoughts that keep an info junkie up at night:

I read a very short article today in Utne reader about the positive health implications of our genetic ancestry being mixed with a little Neanderthal.  Researchers  reported a couple of years ago that due to a little inter-species hanky-panky way back in the day, lots of humans carry some Neanderthal DNA-- 1-4% of Asians and Europeans.  Late last year, new research supported a finding that there's a good evolutionary benefit to this mixing:  a strengthened immune system through the contribution of different human leukocyte antigens (HLA).  That's something dog owners have known for years.  Mutts are healthier than those inbreed pedigrees.  My gorgeous lab, for example, missed out on the hip malformations common to her breed, but did get the eyelid defects that led to her blindness in late life (despite two corrective surgeries).

The article went on to state that immune gene mixing, critical to species survival, shows up in our mate selection.   Says Stanford, "people are attracted to the scents of prospective sexual partners with disparate HLA types."  That's another bit we've known for a while (as mentioned in an earlier post, "You May Sniff The Bride").  But it got me wondering.  If we consider that this scent attraction is a positive indication of procreative success, does that mean that persons with more similar HLA are more prone to miscarriage?  A quick Google and Pub Med search confirmed that I'm not the only one curious about that.  The research would indicate it's true-- and that it will make IVF more difficult as well.

I wonder what this means for people with anosmia.  Are they more likely to mate unsuccessfully, at least from a procreative standpoint?  It does suggest strongly that marrying outside of your genetic lottery is sensible.  Here's to the mixing of the pool!
Posted by Jana Svoboda, LCSW at 3:01 PM