Strayed to Houston and Happy to Be There

After a few months on the fringes, if not off the radar, I have crawled out to see the populated world more and more.  And oh what treasures there are to be uncovered in out tiny hamlet!

Tonight, Cheryl Strayed introduced us to her new missive, an adventure story about her walking impulsively and ill prepared the Pacific Coast Trail at age 26.  She knows how to suck a reader in by the first paragraph:  we watch in horror her boot tumble down a mountain, catapulted by Monster, her initially evil then beloved backpack companion.  38 days out; the remaining  boot is a orphan and a burden now, just like she is, and gets an unceremonious (or perhaps pissy is a better descriptor) toss off the same mountain.
Cheryl read about finding herself by getting lost, dirty, blistered and tried and tired..  I bet you can guess which side of the whale she emerged from.  She's a delightful speaker, full of smiles and Good Story and tips on doing what scares you.  Get her book at your local independent seller.

She was joined by Pam Houston, who earned my literal loyalty years ago with her collection of short stories "Cowboys Have Always Been my Weakness."  It hold well with time.  Now Pam's got a new collection of vignettes--a gross of prose--titled "Contents May Have Shifted", an allusion to the slipperiness of reality as filtered though time, memory, and a language that won't stand politely still.  It works, and it's worth the ride.  In lecture, she is relaxed, accessible, full of wisdom on the process, and also funny as hell.

Corvallis is becoming the diminutive Prague of the left bank.  There were several art openings this week, and last week Joyce Carol Oates flirted her way through a very informative Q and A about her prolific oeuvre to a big crowd at OSU.

Writing is a path to personal truth, a way to process the complicated and persevere the ephemeral.  Our stories are so important.  And if we think we can't write well we can find authors like Strayed and Houston who approach our truths in such as way as to get us access. Maker's Space at the Majestic is a place to watch for upcoming writing workshops.  Check bulletin boards, ArtSpace newsletter, the library and other gathering spots to see who's coming up to encourage your story out of the body and onto the paper.
Posted by Jana Svoboda, LCSW at 11:45 PM No comments:

"Don't Let The Sun Go Down On Your Grievances"

Worked in the garden today; a productive and relaxing way to spend a Sunday.  Saw this little snail tracking through the concrete (at quite a brisk pace, considering).  I was listening to a cover of a song by Daniel Johnston, an brilliant musician who's struggled with major mental illness all his life, and who Kurt Cobain called "the greatest living songwriter".  I'd heard some of his stuff on the radio, but didn't buy his works until he did a surprise appearance on Austin City Limits in 2009.  I wasn't intending to listen to him today-- had the player on shuffle when his song came on:  "Don't Let the Sun Go Down on Your Grievances" (covered by Clem Snide; you can listen to it at the end of this post).  I hit the replay. Life can be providential sometimes.

Later I had a very difficult conversation with a person I love very much.  I can only semi-accurately report my own side of it, knowing full well we are all "dirty little projectors" as Jung said.  But my experience was of two people trying very hard and still really misunderstanding each other.  We persevered, stumblingly, wanting to hear each other and wanting to be heard.  I can't speak for the other, but I know my gut instinct was to get the hell out of there.  And my heart instinct was to keep at it, keep at it. The two battled it out to an unglorious stall.  It is so hard to be truly vulnerable to another human.  We want to bluster, or hide, or do anything to protect fragile feeling Ego from pain.  It takes guts to keep showing up and showing our wounds.

I am a firm believer in a notion I've often shared with clients, and that I read somewhere in a completely unrelated book I'll long forgotten (please clue me if you know).  The book was about economics, if I recall, but the line I'll never forget is how us humans are all looking out of our own thin aluminum tubes into the world, and thinking everyone is seeing the same thing we see, when all they see is there own small view.  Even as I try really, really hard to see bigger, I know my view is never going to be the same-- I won't have the history, the genetics, the inner experience to truly get what someone else is perceiving.  And even though I work hard to expand my understanding, I am expanding it through my limitations, some of which are not in my awareness.

The desire to self-protect, even at risk of isolation, is within my awareness.  So I fight it.  Clumsily, but with Wise Mind knowledge that love crowds out fear in the end, and some kind of faith that it's worth the exposure.

As I thought about this tonight, Daniel Johnston's song, and his story, ran over and over through my mind. I thought about how brave he had been to put his heart out there when his head was so messy.  When I saw him on Austin City limits, it felt clear how both hard and wonderful it was for him to come out and sing to that crowd.  (Read more of his story here).   And I realized I didn't want to let the sun go down on my grievances.

I did some work I'd been neglecting because it was painful and took energy I didn't feel I could spare.  It wasn't enjoyable, but neglecting it hadn't been either, and tackling it was more energizing than I imagined.  There's more work to do, always, but my heart feels clearer for now.

Related Posts:  The Bravery of Relationship

Can't sleep.  Thanks a lot, North Carolina.
A few thoughts about marriages, gay and otherwise.

Marriage is a social, cultural and legal institution.  It extends rights, encourages economic stability and the forming of households that create the backbone of community.  It's a great place to raise kids.   It's a opportunity to choose love against isolation, and to develop spiritually by learning how to negotiate fitting two stories into a bigger one. When done mindfully, it brings the intention of encouraging and supporting two individuals to extend themselves in identifying and bringing to fruition the highest, wisest hearts of self and partner.

It isn't solely for procreation, or God would smite down all barren persons, right?  And it would follow that older persons should not marry if indeed childbearing is the main purpose.  But most religions have no issue with the childless marriage.  Christian heterosexual marriages, sadly, are not much more likely to succeed than unions not blessed by a church.  Baptists have among the highest divorce rates, outpacing agnostics and atheists alike.

The State of Marriage is a Mess. But homosexuals don't seem the biggest threat to it toppling over.  If you're straight, It's much more likely that another heterosexual will threaten your marriage then a gay person. You're really probably safe there. People spend too much money, time and anxiety planning weddings and way too little thinking about how they want to create a marriage.  Gays will probably do some of that too.  But I am less worried about people who want to attempt a life of love and commitment than those who find that threatening.

If you are gay, or barren, or reasonably compassionate-- if you fall into the majority of Americans who have no issue with two committed persons of sound mind and high intentions being allowed to publicly and legally proclaim their love and desire to merge their lives and homes-- I hope you will write your elected officials and tell them it's time to get on board.  When women were allowed to work for pay, and not viewed under the law as property of men, when slaves were freed and children removed from dangerous labor jobs and allowed to go to school, the world didn't end.  It grew up some, accepting its responsibility to be humane and to extend rights from a privileged few to more of its citizens.

It's time to do the right thing, and stand together for love.

I can't understand for the life of me why the Pope, among other religious and political leaders, would say that gay marriages would threaten the future of humanity.  Maybe this video can clear that up: 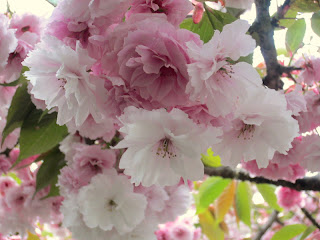 Just when we thought the dark would never end, Spring shows up to tart up the place.  Blooms are busting out, and though it's STILL raining (hey, it's Oregon-- we don't expect dry til the 4th of July), we can't help but smile at all the color.

While it's traditional to make resolutions with the start of the New Year in January, most of us don't have the energy then.  Winter is the time of dark, rest and reflection.  Spring is the time for renewal and lively action. First Alternative Co-op's Thymes writer Dave Williams reminds us that this is the time to plant seeds for what we want to harvest in our future (to read his great article, click and scroll to page six here).  Spring's buxom and generous nature encourages us to wake up and get moving, to bust out our full palette of creativity and to access our hidden reserves.

Spring offers us the wind.  The sail's been there all along.  It's up to us to find a good direction.

Related posts:
Create A Map for Your Destination
Set Reasonable Goals
Listen to What Future Self Wants