How was your day?  Mine was a mixed bag.

I started this day completely overwhelmed and nauseated by the smell of fresh celery from the farmer's market.  My brain is still trying to figure out smells after a few months with none at all (see anosmia posts for details); and for some strange reason the few it can smell tend to freak it out completely.  Another woman with parosmia (the fancy-pants term for distorted smells) described the one we get as variations on "zombies and old socks".  That's pretty close.  I get it with coffee, cucumbers and peanut butter, to name a few.  And oh my gosh, most especially with celery.  That one can chase me out of a grocery store.  Today said sweetheart brought home our box from the farmer's market, featuring celery so fresh it slapped me on the face, and I had the olfactory equivalent of motion sickness for the next three hours.  But, wearing gloves and gagging in the most delicate way, I chopped some up and double bagged it for our river trip. 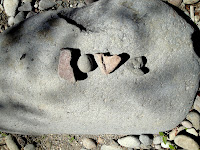 We headed out to the McKenzie with family and friends for a beautiful start to September.  The weather was perfect:  robin egg blue skies, a pleasant breeze and a temperature just right.  The river sparkled blue and green, clear and clean.  Strangely, on this beautiful holiday weekend, we encountered few people:  a couple of drift boats, a few scattered fly-fishers winding their lines into the constant hatches.  We picnicked on a shore, and I found a few sets of LOVE rocks, and threw the brightest jasper into the water to better appreciate their colors.

We stopped at Jump Off Joe, a high rise accessed by a 50 foot log way up over the water, where two of our party braved the shade and still very cold water to take a leap.  Sweetheart was one of the two.  I wonder when I will be chill enough to watch someone I love do something that looks dangerous without picturing a future without them.   I think probably never.

We made an easy and exciting run through the wave trains and did a bit of manuvering to get through Brown's hole, and I remembered why I love running rivers.  A few no-harm-done-except-panic accidents has left me pretty wary of whitewater.  Once I'm on, I'm fine, but it's been harder and harder to get on.  I know from experience that the best way to deal with fear is exposure.  I also know the easiest way is avoidance.  I'm better at the latter.

One of the panicky accidents occurred at Marten's Rapids, a class three (difficult) set of rocks and waves at the end of our run.  Among its obstacles are two large rocks known as "Oh Shit" and "Castration."  In June this year, a man making a lousy run died there.  It's no picnic.  Although I'd experienced with all the thrill and safety of a carnival ride, a few years ago things changed.

There were several circumstances afoot that particular summer day.  I was in a boat with inexperienced rowers, who stopped rowing as we hit a set of powerful hydraulics at Marten's.  The raft was new, stiff and unforgiving.  This combination of factors was enough to make our joyride into a nightmare, plunging the raft into a strong hole where thousands of pounds of hard water pinned us against a huge boulder.  Half the raft was under water and we were clinging to each other and the raft for what seemed like eternity.  Certainly long enough that I considered this might be it.

I was holding on hard to the oldest member of our crew, a woman near 80 years old. The water was snowmelt, freezing.  One by one, people were knocked off the boat by the water, including the captain, and finally even the woman I was trying so hard to hold.  That was the hardest part for me, watching this fragile woman washed off the boat and into the rocks and rapids.

Soon there were half as many in the boat.  The weight difference changed the dynamics enough that we popped free.  We all had PDFs (life jackets-- and please, don't even THINK of boating running or cold water without them).  Those taking the accidental swim floated out of the rapids and were rescued by rope or the boat behind us.  Except for a bit of hypothermia, and in my case a new profound respect for and fear of whitewater, we were unharmed.

But I was harmed.  My brain couldn't let go of the visuals of the water and the faces of the crew, and especially the picture of that elderly woman pulled off the raft.  I avoided McKenzie for a long time.  I skipped several river trips.  The ones I did that involved even more technical rapids required all the coping skills I could muster to even get out of the door and into the car.  Again, once there, I loved it.  It took a lot of self-talk to get back to the McKenzie.  Part of that talk was thinking about my clients, who do brave things every day.  Sometimes their brave tasks seem incredibly easy to me.  Sometimes they are way above running a rapid.  I have great respect for each end of the spectrum, because I know that Brain learns fear in a visceral way.  It doesn't matter if it's flying or spiders, whitewater or job interviews-- panic is panic, fear is fear.

When we approached Marten's my heart was aflutter.  I thought about swimming to shore and walking the last mile of river.  I asked about, then declined, a drop off there.  I thought about the many times each week I ask my clients to do something that is extremely difficult for them.  I tried to remember ways to calm my amygdela and think logically about the times I'd been through this rapid easily.  Fear Weasel Brain was having none of this, so I decided just to shut up the internal dialogue and see what happened.

It was a great run.

After the river, I relaxed with the family at Squirrels over a good-enough meal.

So:  how was my day?  Well, there were parts I didn't mention-- putting up plums, missing my deceased parents, worrying about and loving family members, doing laundry.  It was nauseating, wonderful, terrifying, reaffirming, tedious, beautiful.  In other words, an ordinary extraordinary day.

Ask me next week, and I'd tell you it was great day.  But in truth, like most days, it held way more than that.  It was a mixed bag.  A beautiful, frightening mix. 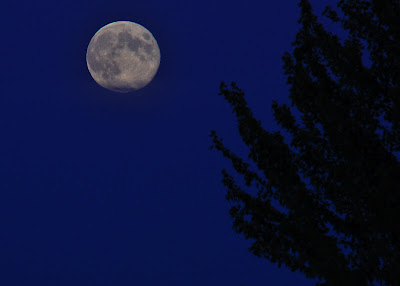 PS  Did you see the blue moon? So gorgeous!

Thank you, Jana. Your writing is a gift; your insights are a treasure. You are a blessing.
Marilyn