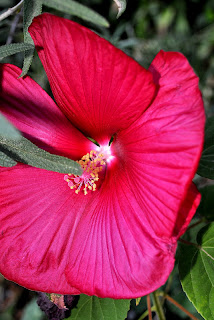 It's been a month or more since I last posted.  There are five draft posts, half-started, waiting for some nudge from the muse.  There are a dozen more I wrote in my head to the point they felt completed, and thus will never see print.  That's a bad habit that also applies to letters to friends (ask my poor penpals).  I thought to try to sum all of it up.  A trap, that-- trying to capture these ephemeral moments of grace and crystallize them into something to hold.

I can tell you these things.  Fall has come, strong on.  The wind blows, the trees undulate, and the little elm leaves make tiny yellow tornadoes on my driveway.  There is a pumpkin and two squash soberly decorating my concrete porch.  The students are back in my sleepy town, and suddenly the streets are filled with cars and people and bikes on the sidewalk and discarded beer cars and noise.  It's been sunny and dry for days, and I long for rain, or at least enough humidity to smile without my lips cracking. 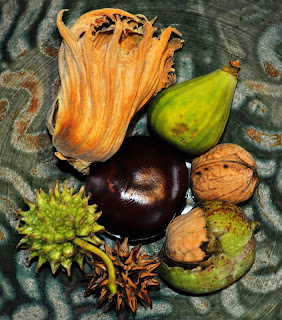 Beside me, as I write, is a bowl filled with bits of windfall I found walking home from work tonight.  A hazelnut, still in its paper tutu.  Two walnuts, one in a green casing, another bared to its gold shell.  A small fig that will never ripen.  Two sweetgum ballsl one green and the other dried small, prickly and brown.  A horse chestnut, shiny and brown.  They are an alter to transience and season.

Here are the blogs I almost wrote.  Maybe soon.
Been through hell?  Try not to move in.
The messy and the real
Offerings for the Shadow
That magic (radicalizing) moment
The sting of things; the lure of the numb

Two years ago, a first of a series of sad and tragic events unfolded in my inner circle.  They weren't all things that happened to me, but they were close enough to have profoundly shaken me. There is something in humans that seeks and responds to pattern, and fall brought with it emotions of these events and hopes that the cycle might now slow.  It didn't, for a time-- the same themes of love, loss, death, transition recurred and were amplified by the anniversaries of the original losses.

I'm human.  My heart wanted to shrink in response to the enormity and sadness of these events.   Especially this last week, I longed for a retreat somewhere remote, where I could sit in silence alone.


It didn't happen that way.  And in spite of myself. I had an epiphany against my own will, all because I Just Showed Up.

More about that later, perhaps.  For now, I know at least,
these things are true:
Life is full of unbearable, undeserved suffering. Life is full of incredible, miraculous beauty.    There is too much that needs doing.  Doing anything is better than doing nothing.  We all can be jerks and misunderstand each other too easily.  And we are deep wells of creativity, hope and  love.

Love is everywhere, waiting for eyes to see it.

Jana, I feel your move into greater authenticity and it makes it safer for the rest of us to share and accept our less nice sides and hold others less nice sides in community.
thanks and hugs
Roberta

Thank you, Roberta, for not only these words but evidence through action last week! Your kindness to my crabby side was grace delivered.