Earlier tonight, I looked at the Facebook page of a woman who recently changed coasts.  She added a video she said she used to explain to Easterners how life was here in the West.  I made the mistake of clicking on it, and now for the last hour or so the oddly hooky "Man on a Buffalo" refrain has been sawing away on my frontal lobe. Soon I'll resort to the handful of anti-helmintic (that's fancy-ass for worm) home cures, but in the meantime let's look at the malady more closely.

Earworms are common-- nearly everybody gets them.  Studies put the range of reporters in the high ninety percentile.   Women tend to have them longer, and find them more annoying, but both genders suffer as frequently.  They're those little short snippets of songs that loop endlessly in your head for up to hours at a time.  Lyrics are three or four times more common than just melodies.  We don't usually hear the entire song, just 15-30 seconds of a catchy phrase.  Commercials know our auditory memory capacity and play to that, with short, snappy jingles the advertisers hope will take resident in our brain and preferably in communication with our wallet.

The phrase in the header, "Imp of the Perverse", is the title of an Edgar Allen Poe short story about a man driven mad (hey, it's Poe) by torturous "ringing...in the memory" of "an ordinary song, or unimpressive snatches from an opera".  He rightfully notes it's not much better if it's a good high-brow song-- but let's face it, it rarely is.  My last two earworms were bad hits of Helen Reddy and Olivia Newton John. Hated them then, hate them still.  But it's not much better when it's Jimmy Cliff or Madame Butterfly.

Our brains love music.  We can more easily remember sequences of numbers or words when we add a melody to help attach them.  People with naturally more sticky brains (think OCD) are going to be predisposed to earworms, but average Joes also go there when there is too much competing information and the mind wanders to find a predictable path to pace.  Music IS predictable, and that's the problem. Visuals change according to angle and light, smells and tastes according to proximity and competition (think the taste of a particular wine with chocolate compared to same wine with shrimp).  But Baby Baby Don't Get Hooked on Me is recognizable soft or loud from the first couple of notes, and the brain grabs it like a falling man might grapple for a ledge, then hangs on for dear life.  On the other hand, Brit researchers found earworms are more likely to crawl into a bored, distracted mind.  Yet another reason to follow paths of moderation in thinking. 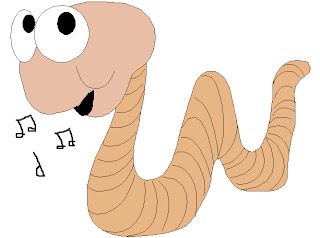 Stressful as the worms are, their role isn't completely parasitic.  They are giving the auditory cortex the equivalent of hand-wringing or pacing when the rest of the brain is overloaded.

They're benign in their usual short-lived state, although clinical anecdotes present cases where sufferers had the same tune for years at a time.  For most of us, it's a few minutes, maybe off and on over a few hours.  It rarely lasts past the natural break of sleep.

Remedies abound, but no sure cures.  Here's some to try from the HowStuffWorks site:
1)  Sing a different song (Girl From Impawhatever is famous for this) or play a tune on an instrument.
2)  Do something entirely different and physical-- work out.
3) Sing the earworm song ALL THE WAY through (past the snippet that's looping).
4) Visualize the earworm, embodying the song, crawling out of your ear. Then visualize going all Darth Vadar on it.
5) Insert it in another ear.  Do not expect them to love you for it.  This trope appears in several science fiction stories as a gift that keeps on giving.

For more on this little life annoyance, read this article by Bill White or listen to this episode of the always fascinating Radio Lab podcast: http://www.radiolab.org/blogs/radiolab-blog/2008/jun/17/earworms/


I'm off to de-friend Leigh from my Facebook page (just teasing, you vixen)  and then maybe hum a little Johnny Cash--

What ever you do, don't click here.  It's only half as potent as "Man on a Buffalo" but you still may beg for mercy.  You were warned.

Labels: earworms, Imp of the Perverse