Your Brain on Grins 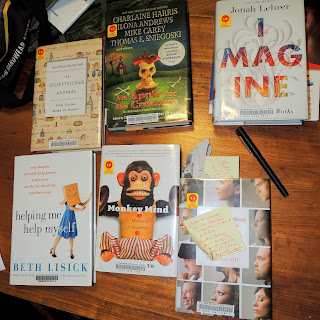 Went to the library for the first time in a while, and binged at the new release section.  It's fun to judge a book by its cover and its first few paragraphs, and I pick up things I'd never hear of, let alone consider, otherwise. 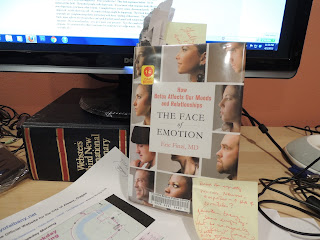 Take this one:  The Face of Emotion:  How Botox Affects Our Moods and Relationships, by Eric Finzi, MD.  I thought it might be a condemnation on the use of botulism toxins to freeze our faces into wrinkle-less masks.  But nope, that's what this guy does for a living-- or rather, he's a dermatological surgeon, and Botox is a big chunk of his practice.  Now I'm judgy as can be, but I read the back cover, and a couple authors I like neuroscientist, an evolutionary biologist) like it, and their comments are focusing on the face and emotion part, not the botox.

Home, an hour later, I've read the first 150 pages, and put in 20 or so paper scraps to mark passages and studies.   His premise is not ridiculous:  facial expressions form a strong feedback loop to the brain.  Maybe you've heard of the pencil study.  He gets to that around page 105.  Experimenters in the early 70s found that when subjects clutched a pen between their lips, effectively forcing the same muscles used in a smile, they rated cartoons as funnier than if they held same pen with lips.  To remove bias, the subjects were doing various tasks while mouthing their pens, under the guise that the study was actually looking at how persons with limited use of limbs could adaptively use mouths to control tools or complete tasks.  Holding the pen in the lips inhibits the muscle used primarily for smiling, and it "sort of bummed them out".  No, not quite their language-- it "inhibited the experience of positive emotion" or something.  At best, it seems our thinking about why we are making the face ("I'm happy" vs "this pen shoves my mouth up") doesn't change how our brain interprets the muscle motion-- Brain is heartened to see us smile. 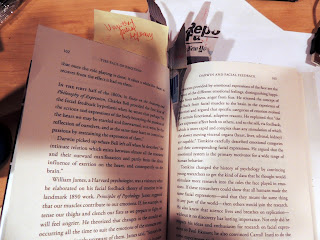 The book is chock full of interesting anecdotes, most of which you probably have heard elsewhere.  Dr. Finzi touches on the universality of facial expressions over cultures.  A a true smile is a smile wherever you are. and disgust looks the same in remote villages in Ecuador as in Brooklyn. He talks about micro-expressions, those very fleeting millisecond facial changes that modify or discount conscious facial changes.  You know that fake smile people give?  It's in the eyes.  It's hard to fake an eye smile.  They are using their zygomaticus muscle but inhibiting their eyes, a big give away.  (Caution:  sociopaths can fake it pretty good, and that's because they aren't fakiong it-- they are delighted with glee they are getting ready to eff you up.)

You can elicit that same true smile in some weird ways with the same sunny-after-glow.  Scientist Duchenne did it with electrodes, and his subjects full on grinned peepers to teeth  (see pic on page 64). Where there are cultural differences, it is more about circumstances in which one might be allowed to display these expression, but not their existence or meaning.  For example, Japanese youth often hide smiles behind hands and engage in more social (not Duchenne full-on) smiles.

The read is full of interesting nuggets to illustrate that much of what think is conscious about expression is not, and either way, it changes or brain, and then often or perceptions/moods and way of thinking of the situation;.  Case study of one:  I consciously practiced the Mona Lisa Half Smile (eyes slightly lifted, forehead smooth, peaceful secretive smile) through Chapter 1-5.  I feel calm and good and benevolent.  I revved up to the open mouth crinkly-eyed Duchenne smile for the next half hour and was energized-- it was cold bacon hitting a hot griddle.

The point-- there is a point here-- is the expression makes the face, and the face makes the wo/man. and the wo/man makes a life out of that face. 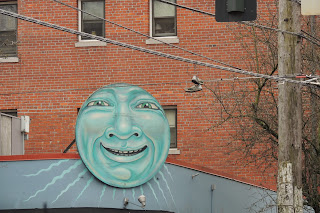 We smile all alone, so it's not just a social reaction.  But we smile 6 times more in social settings.  Blind people too, so it's not just a social feedback loop.  The more we smile, the happier we'll be.  We are throwing little dopamine biscuits into our reward center, which is wired by time and experience to know a good smile at you usually benefits you at least indirectly, and a spontaneous smile is proof of happiness.  And at this point Le Sophisticate Brain gets a little mushy, because hey, why you so happy holding that pen with your teeth?  But look, you are.  OK, let's reinforce it with a speck of dopamine.  REWARD!Brain correlates both the events that bring smiles and the smiles that bring rewards as desireable; it's not so picky.  And the person, they get happier.

In my single case study I improved my scattered anxious monkey mind's mantra (too much to do too much to do /repeat) into a state of darn nice happy contentment.  and a little giddy  excitement.  just by consciously relaxing the part of my forehead associated with distress (read: worry, sadness, frustration etc) into a friendly open field.  And I found my lips twinkly upward, and then my eyes, and they by golly I was reading and grinning like a goof and happy.

I have to say this works better for me than a meditation sit, where i endure for 20-30 minutes and come out either slightly comatose, or full of self-criticism for getting bored, chasing my thoughts, and not Getting There.  Laughing yoga and smile practices seem to achieve very good results without all the painful positions for those of us who can't sit still for more than fifteen seconds.  It's not the same as all of the benefits you'd get from years of meditation practice, but I'm sold on incorporating MORE JOY, or at least practicing its expression.  Monks and laughers are both activating similar parts of the brain.  There's many ways to skin a cat.

The Big Kabowski of the article is his noticing that as he botoxed away those worry creases from his lady patients, they reported feelings happier, for the 1-3 months after the shots wore off.  Here things get a little mushy.  The effects held true whether they were receiving botox for migraines (another indication), bell's palsy, whatever.  "When three is not tension in the frown muscles, when those muscles have been temporarily frozen with Botax, there is no negative feedback to report to the brain."  In other words, his inelegant hypothesis is that when we smile, brain says "I'm happy, things are good"  We are changing our thinking and emotions without real consciousness,  But effectively.  When we frown, same thing happens.  When we can't frown, we feel as if we aer in less distress.  To simplify it even more, Finzi believes this feedback loop is being calculated all day long on a brain score sheet.  "I'm frowning this much, fear this much, worried this much, happy this much:  total:  PA'NIC with occasional sun bursts."And we can choose to consciously manipulate that.  If we literally cannot frown, the thoughts and feelings triggered by this facial reaction aren't formed..  Studies on persons with facial paralysis echo this finding:  the sufferers say they can articulate the emotion but can't really inhabit it. 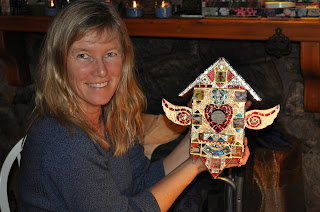 Finzi did an interesting study.  He took people with depression and migraine and treated their migraines.  They were less depressed.  Who wouldn't be?  They had migraines before.  So he narrowed the field.  He treated people with depression.  If you know what someone looks like with true depression, you know what I mean.  Crumpled faces, worry crease, downward jowls.  Behold, they improved-- til the shot wore off 1-3 months later.

A couple of things might be happening with our subjects.  They look less depressed, so people are complimenting them, interacting with them, smiling at them more.  They are smiling back, more effectively because they can't pull that ha;f-assed smile with wrinkled forehead off anymore.  We're social smilers-- you give more, you get more.  Now they smiles look less pained, ore genuine.  It's reinforced by other's reactions, by what they see in the mirror.  Hey, maybe this botox isn't so evil after all.  It's so local, so specific-- probably less risky that a lifetime of pills that have to metabolized through your liver.  I'll be going back to the stacks to see what hard science has been publisher about this theory. 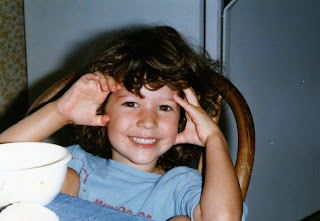 In the interim, I'm just going to do my own experiment: 20 minutes conscious smiling every day.  Maybe broken up into 5 minutes an hour.  See what happens.  Can't hurt, unless I swallow the pen :)

This practice is especially useful for those of us with TOO DARN MANY MIRROR neurons.  How do you guess we show empathy for all those stories we hear?  We lean in, get the dog eyes, wrinkle our foreheads in concern.  We are deeply intereswted in analyzing all those microexpressions and we form little movies of them on our face and brain.  And then, like actors repeating a highly emotional and dramatic role, that faucet don't turn off when the show is over.  Our brain score card has registered that we wore the unhappy/anxious/sad  face much of the day. Guess how we may feel?   For therapist, this is a real challenge.  It's also way I like to PLAY SO HARD when I am not being a therapist,, which you may have noticed if you follow this blog.  Antitoxin!  Because when I am wearing the expression of deep concern, my brain is on alert that life is difficult, sad, nasty, brutish and short.  I throw in as much lighthearted humor as is appropriate to my client's situation, for balance, but it takes a toll.  As a result, don't ask me to join you see the latest expose on Something Horrible That is Happening Right Now.  I just don't want to work after work.  But if you want to take the dress-up box to Browsville for a photoshoot  and picnic in the park, I'm in.

Homework:  try it!  Do a quick facial scan.  Check for the usual suspects:  tight jaw, set mouth, wrinkled forehead.  Imagine Mon Lisa's forehead, a vast plain of relaxed skin.  Life the corners of your mouth and eyes.  Use props if you like, but you don't need to for effects.  Hold that expression best you can for you next 5-15 of whatever you are doing--dishes, talking to a friend, shopping at the store, weeding in your garden.  What do you notice?  Let me know.


Read this book, or hear Finzi's interview on NPR.  Witching hour has struck and I must shut up now so you are left to your own devices on that one.  And make sure to practice the eye/mouth smile at least 5 minutes a few times a day and report out here.

just been thinking about UU sermon on practicing your smile in the mirror each morning.
been working on Mona smile as I drive - I think it's working -
- thanks much for new research.