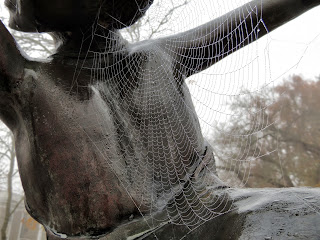 There's been some backlash on the huge swamp-us-in-pink Breast Cancer Awareness.  Psychotherapist and author Harriet Lerner addressed it in her Psychology Today column,  "Don't Think Pink."   I disagreed with part of the post-- I frankly don't mind public events like the "bras over the river" that create community along with awareness-- but like Dr. Lerner, I'm put off by the commercialization of this disease. I don't need pink M&Ms to remind me that breast cancer matters.  I don't like processed food makers pushing raspberry flavored energy drinks under the guise of fighting cancer.  And I absolutely agree that we need to increase focus on environmental risk factors and how to decrease them.  There's no doubt pharmaceutical  research saves lives.  But it would be far more efficient to put some money into preventing disease.

The whole pink-ribbon deal is sketchy, at best.  Christopher Zara, International Business Times:  "Breast Cancer Awareness Month was originally cooked up as a corporate marketing blitz by Imperial Chemical Industries, now part of the pharmaceutical giant AstraZeneca.  The company, at the time, had an obvious interest in reaching the marketplace: It sold both carcinogenic pesticides as well as numerous cancer-treating drugs. 'It was the perfect profit cycle,' said Karuna Jaggar, executive director of the nonprofit Breast Cancer Action. 'They sold chemicals that cause the disease and then the treatments for the disease.' ”

Then there's the forced cheeriness of the month, which seems to insist that cancer is an exciting self-awareness journey.  Well, sure it is.  But it also is horrible, and hard.  And to have to plaster a smile on your face and endure endless chipper cliches lest you be accused of causing your own illness due to your poor attitude-- well, that is an extra circle of hell. 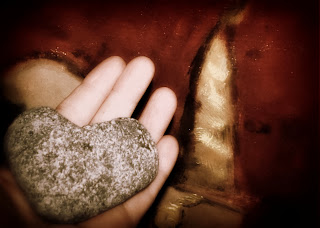 Writer Barbara Ehrenreich challenged this perky weirdness in her Guardian article, "Smile, You've Got Cancer".   "In the mainstream of breast cancer culture, there is very little anger, no mention of possible environmental causes, and few comments about the fact that, in all but the more advanced, metastasized cases, it is the "treatments", not the disease, that cause the immediate illness and pain. In fact, the overall tone is almost universally upbeat. The Breast Friends website, for example, features a series of inspirational quotes: "Don't cry over anything that can't cry over you"; "When life hands out lemons, squeeze out a smile"; "Don't wait for your ship to come in… swim out to meet it," and much more of that ilk."  Now, in addition to having cancer, you can feel guilty that you aren't embracing it. 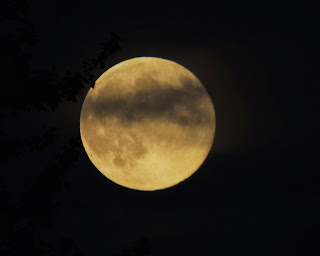 But cancer isn't a grand adventure.  Sometimes, true, it brings unexpected positive side effects:  deeper relationships, a sense of what's important, a call to grace.  My friend Annie exemplified these attributes in amazing, beautiful ways.  And in the end, a year ago, she was willing and ready to die, and did so unafraid and at peace.

But just a few weeks before, we'd walked on a beach while she admitted to me she'd been unable to discuss planning for her death at all. Even though her doctors had told her that "at best, you'll see your son into 4th grade, and maybe if you're lucky, to the Spring." She'd not made a will, discussed her hopes for her family's life without her, or in anyway allowed herself to think-- except in brief, guilty moments-- that her stage four cancer was a serious problem.   To do so, she worried, would be akin to asking for death, for being ok with leaving her sons, her husband.  Annie was atypical.  She was one of the most evolved, loving and positive persons I've had a chance to meet.  But she was also human.  And she needed, at least that day we walked, a chance to tell another part of her story-- that she was scared and sad.  "But I know I need to stay positive to remove whatever block I must be having to being healthy".  I asked her if she thought a two year old with leukemia was "blocked".  "What negative thoughts cause a five year old's brain tumor? Things happen, Annie," I told her.  "We can't control everything. " 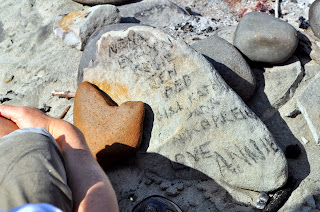 Annie's death occurred when she was in a place of peace, surrounded by family and friends.  But if she had struggled against it, I would have loved her all the same, and I wouldn't feel she wasn't brave for it.  The reality of cancer is not cheery.  Photographer Angelo Meredino captured this in a heart-wrenching series of photographs of his girlfriend during her illness.

If cancer has touched your life, or that of someone you love, it's not enough to buy a packet of pink Swiffer refills.  Throw some of that money and energy into programs that assist persons affected directly.  Volunteer for hospice.  Learn more about environmental causes of cancer and agitate for research and change.  And if you want to donate to a breast cancer organization, consider the Breast Cancer Fund, which is actively working toward prevention.  You won't get a pink plastic water bottle, but you might make a real difference.
Posted by Jana Svoboda, LCSW at 11:49 PM

Jana,thank you for opening this door again. Most I like your personally stories and comments about discussions with people and friends, who has gone through this process. Still it is different for everybody. I think much like you. I have also gone through the process two times.Pink is only very small coloring. It is good for them, who has not other ways to mention or to discuss about this serious circle of life.
The best thing I have got is I real enjoy I still life, maybe it is sometimes troublesome, and we have cold, dark and rainy days. Like today. October is not my best friend. Love greetings for you Jana, my friend from Oregon :-)

Thanks for this, Jana. So many ways to navigate ourselves through difficulties. And many ways to honor and celebrate, grieve and fight.