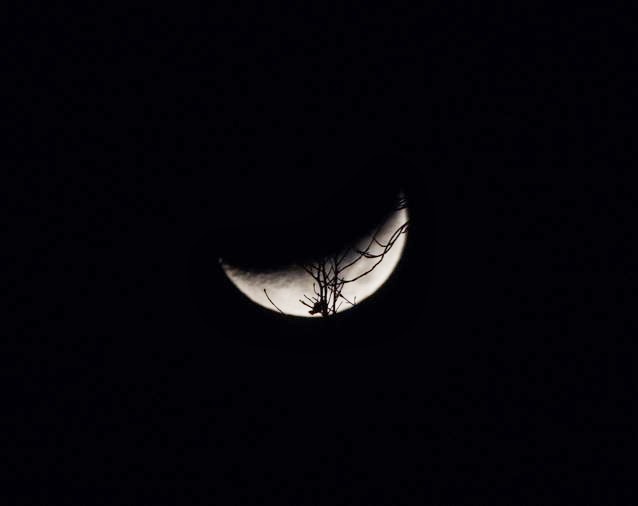 Hope you're well rested from your Sunday Sabbath challenge.  I enjoyed a lazy morning in bed with tea and paper and meditation and stretches, then a leisurely hike into the Wild Blue that is our freakish January weather.  I made a decent, well rounded Slow Food dinner.  At at 10 p.m. I watched the moon cap a quiet day with a luminous belly-flop into the western sky.

And it was good.

I may be a little TOO relaxed to get back into a five day work week after all these holidays.  So I've picked a challenge that I do on work days anyway.  I'll aim to be particularly mindful this Monday.

As a general rule we don't seem to do this so well anymore.  Maybe it's because we are all so busy.  Maybe it's the competition conversation gets from devices and other pulls at our attention.  We seem to be talking as much as ever, but true dialogue seems to be an endangered activity. This sad observation is the keystone of MIT professor Sherry Turkle's upcoming book, tentatively titled Reclaiming Conversation.  In her 2011 tome Alone Together: Why We Expect More From Technology and Less From Each Other, Turkle posited (with the research one would expect for an MIT psychologist)  that the digital revolution was hacking the flow of deep human connection.  In a recent Atlantic article about her latest findings, she observes we are communicating more than ever.

The conclusion she’s arrived at while researching her new book is not, technically, that we’re not talking to each other. We’re talking all the time, in person as well as in texts, in e-mails, over the phone, on Facebook and Twitter. The world is more talkative now, in many ways, than it’s ever been. The problem, Turkle argues, is that all of this talk can come at the expense of conversation. We’re talking at each other rather than with each other.
Conversations, as they tend to play out in person, are messy—full of pauses and interruptions and topic changes and assorted awkwardness. But the messiness is what allows for true exchange. It gives participants the time—and, just as important, the permission—to think and react and glean insights. “You can’t always tell, in a conversation, when the interesting bit is going to come,” Turkle says. “It’s like dancing: slow, slow, quick-quick, slow. You know? It seems boring, but all of a sudden there’s something, and whoa.”

Today I want you to be spies and revolutionaries in the fight for good conversation.  Even if you don't have a chance, for whatever reason, to get into deep dialogue, pay attention to others' dialogues. Spend a little time listening in or watching others converse.  Notice if they are taking turns, where their eyes are, what their body language is communicating about their engagement.  If you are close enough, notice if they are picking up the conversational balls being thrown out by the other.

Here's a few tips on improving the chances you'll have a good conversation:

Pay attention to body language.  The keys are open posture (no closed arms, hands on hips, heads turned away, back up), decent eye contact (neither staring nor looking askance, and of course that means not texting while talking), and being aligned to and close enough to be able to read the other's body language.

Be a good receiver.  It's great you think you are listening, but could an observer tell?  Here's how they might:  you are looking at the speaker.  You aren't doing something else, like walking away, watching television, checking your email.  (If you're truly busy and it's a bad time, let them know when would be better).  You are nodding, leaning in, making short interjections such as uh-huh, wow, really?, etc at reasonable intervals.  You are asking questions that relate to the topic or "tagging" the information to show you received it.  Simple example:  speaker says "I just saw a UFO."  Listener:  "Whoa!  A UFO?"

Check for meaning and intent.  "You really think you saw a UFO?"  Don't assume, or if you do, at least take ownership:  "I assume you were drunk?"  It's great to relate, but be sure the person has finished their thought before you start launching into your own story.  Which reminds me:

Get more information.  Especially if you don't agree with or understand the listener.  In my observations, when people are in disagreement with a speaker, they (yes, me too) interrupt or are so busy thinking of their response they stop listening.  They then answer with their differing viewpoint before they've checked intention or accuracy.  This leads to debate, not conversation.

In March I'll be doing a free workshop on conversational arts. We'll do some fun games and have some great talks.  If you're interested in joining, send me an email and I'll let you know the when and where.

Quotes of the day:
“The only reason why we ask other people how their weekend was is so we can tell them about our own weekend.”  ― Chuck Palahniuk, Invisible Monsters
"It was impossible to get a conversation going, everybody was talking too much."  -- Yogi Berra

Song of the day: