Another delight!  I've been asking some talented people to pitch in this month.  Today's guest blogger is poet Ingrid Wendt, of Eugene, OR.  She is the author of 5 books of poems, a teaching guide for poetry writing in the classroom, and the co-editor of two anthologies. Her poems have been widely anthologized and read by Garrison Keillor on "The Writer's Almanac." Her poem at the end of the post is from her most recent book, Evensong, published by Truman State University Press.
Her post started as a note to me telling me she needed to say no to contributing.  Before it was over, she'd written a sweet piece about random acts of connection.  She added a bit when I asked if I could use it, and viola!    --jls

Hi Jana,
I've been looking at your blog, and think it's great! I have an idea of what I'd like to contribute, but the thing is, one of my own personal challenges to myself is to get better at saying no. (I said something like that in the Oregonian interview, actually, which is kind of ironic, isn't it? And when I sat down at my desk right now, I was thinking "Jana is giving me a chance to hold to my resolve!")
The challenge I've been thinking of is to be alert, every day, to moments in which I can reach out and make a tiny, momentary, difference in someone's life (a stranger, usually), by letting them know they are "seen." A waiter or barista is a human being, with (hopefully) a life outside of what he or she is doing to put bread on the table. I can ask how her feet are holding up today, or ask the supermarket clerk if it's been hugely busy, this day before Thanksgiving, or maybe he/she came in early or is staying late... and does she live close by, for an easy commute? I can comment on a particularly lovely pair of earrings someone is wearing. I can ask the mail carrier (if I see her) if it's a challenge to keep the mail dry on that particular (rainy) day.
Every day of our lives, we are given countless opportunities (if we interact with anyone outside of our own homes, in any way -- digitally or in person, on the phone or face to face) -- and each one of these brief encounters, regardless of how "business-like" the situation is, is an opportunity to connect, if even on the most basic and fleeting of levels. It isn't hard. The challenge is to recognize the opportunities when they present themselves.
And now, look at this: here I've gone and written a very long paragraph I wasn't going to write (because I have so many other things calling to me, including my promise for an elegy for my dear friend, the dynamic, self-sacrificing and incredible force of nature, Margarita Donnelly, director of Calyx for upwards of 35 years).
But hey, the Sears repairman has been here for an hour. Not a good time for elegy-writing. And it's almost 8 pm. What else was I going to do while waiting for him?
For over an hour, now, he's been taking apart my range, and putting it back together, trying to diagnose why none of the burners go on,  even though my oven does. And even though I can use the microwave to heat up the soup from the freezer, I can't begin until he leaves.
So here I am, sitting at my computer, having started by telling you I'm not as good as I'd like to be about setting boundaries, but I'm hoping I can honor my promise to myself to say "no" more often, by saying I can't give you anything for your blog today; and suddenly I’m remembering a poem I wrote many years ago on "random acts of connection," to go with the page I've almost written by now.
The title is "Mother's Day, Ellensburg, Washington" and in addition to my delight in making "random acts of connection," I think it's also about "breaking down boundaries." Ah, such warring impulses: the need for boundaries, and the need to break them down.  Maybe the secret to reconciliation is in being more selective? I'll need to think about this.
Now the Sears man is putting the stove back in the tight space he pulled it from, and I've told him how amazed I am at his amazing understanding of the electrical circuits revealed by his pulling off the front panel. My appreciation is sincere. And he's working really late. As late as I am, it turns out.
As he walks toward the door, I ask, "Your name again, please? I forgot."
"Garold," he says, and spells it for me.
"Oh, that's my cousin's name," I tell him.  "But it's spelled "GErold, though pronounced like yours, with a hard G, which is how it would be pronounced in Germany."
"I'm part German," he says. "Actually, part Ukranian, too – by way of Canada, then California, then Canada again, and now Oregon.  But my mother is 100% German. In fact, she looks like you." 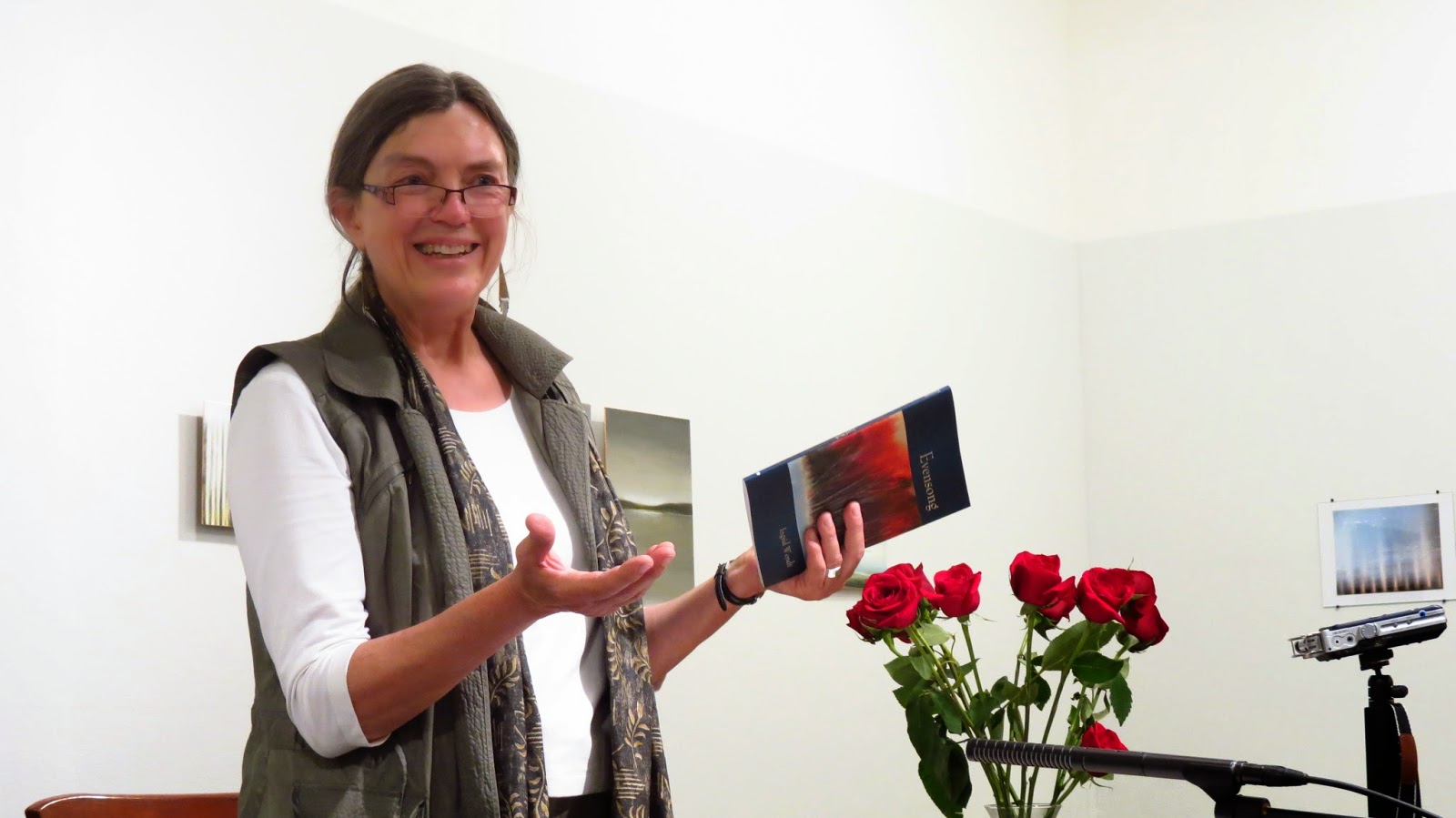 "Hmm, what do you know?" I say (choosing to forget that I remind him of his mother, since he himself, balding, has to be at least 50 years old). "I'm 100% German, too," I say. (A fact I once was loathe to own, in my earlier years, learning world history.)
"Yep," he says, "you look at lot like my mother." And as he leaves, to go home to dinner (which, he reassures me, is only 15 minutes away), each of us is smiling.
I still have my own dinner to cook, of course (in the microwave: the stove turned out not to be the problem: it's the breaker switch, which means a visit from an electrician, maybe tomorrow or the next day, sigh.)  And I'm choosing to regard it as a compliment, that comment about looking like his mother.
But here I am, having a great time sharing this with you.  Hungry.  But smiling.
Sincerely,
Ingrid

Next to me at the counter, a woman, a stranger
compliments our waiter on his tie:

imperial crests perched
like red and black chickens
too big for the roost:  out of place
among hashbrowns and toast as I was last night
reading mother and daughter poems to college students
in this high desert oasis where children are not
where it's at and mothers are who you have to
be seen with at breakfast during this annual visit.

So why my surprise when the waiter suddenly beams,
becomes voluble; tells, although I can't hear, what is surely

his favorite tie story before moving on to refill my tea
and converse as though I were not old enough to be his own
mother:  I, who at eighteen thought twenty-one
unapproachable; twenty-one, thought the faculty

wife with toddlers already was over the hill; who just
this morning has been looked through by just such another
young woman, her eyes on a future vague as glamour surely
lying beyond this tedium of courtesy, beyond this plain, blatant day.

And why am I suddenly grateful, as I found myself just
last week in the store when a clerk I'd never met, exclaimed

What a beautiful jacket! and I saw she was talking to me.
And why, less than an hour ago, asking directions of the older-
than-middle-aged filling station attendant, didn't I follow
my impulse to ask where she got that peach-colored orchid on

her lapel, so she could maybe have told me one of her children
gave it to her; so she could have had someone to tell?  Such
simple things, really:  these moments of pleasure I keep on learning
are yes, each day in our power to give each other, to help

keep this inescapable human circle in repair, keeping
each of us, as the lucky among us once were kept in the eyes
of our own mothers, visible.  Whole.
--Ingrid Wendt
from Evensong, Truman State University Press, 2011

See more of Ingrid's poetry at her website, ingridwendt.com

Oh Ingrid, this is beautiful, the more so because I know that that is how you live your life. These moments of "touching" another are so important. Thank you for reminding me.

Thank you for showing me how no turns into yes! A;also , reminding me about how little connections make the world a nicer, richer place.

Thank you very much, Anon, Pat, and Shelly, for reaching out and touching me with your words. My spirit is stronger tonight, reading them.

"...impulse to ask where she got that peach-colored orchid on

her lapel, so she could maybe have told me one of her children
gave it to her; so she could have had someone to tell?"

Such a beautiful reminder to let another's spirit shine through!

And it's such a joy to see it shine! Thank you, Cheryl.