I was doing the laundry this evening, and took out a favorite blue linen dress.  A gift from a sister, I've had it for years.  It's well made, sturdy but soft, comfortable and can cross into formality or a casual day. It also now carries a strange and beautiful imperfection on the back hem-- a fluttering low cloud of white transitioning to flamed wine edges, several inches across and a few inches high.  A year ago I hung it to dry in my laundry room, not noticing that it was brushing the bottom of a shelf.  The shelf held a bottle of bleach, which had cracked and leaked into a puddle too thin to notice. Some of you know i have anosmia (loss of sense of smell).  More accurately now it is severe hyposmia, meaning I can sometimes smell some things, but bleach isn't on the list. 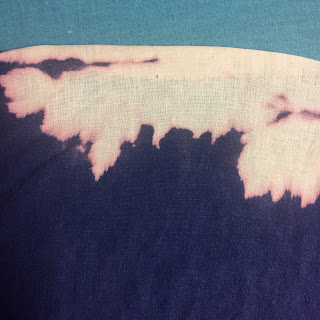 I'm not a very visual person.  I notice details of things that some people don't notice, but mostly leaves and not trees, if you catch my drift.  I grabbed the dress and wore it to work, and it wasn't until late in the day that someone asked me about the unique design on the back.

Most people would have thrown it out.  But I love that dress.  And I'm thrifty as heck.  And mostly, there was something about the wabi-sabi beauty of the accidental design, and the metaphor it sang to me.  So I wear it.  I wear it because it is still all those good things to me-- comfortable, sturdy, well-made, functional.  And because it is imperfect and messy.  Just like every human I know.

In my work, I see people all the time who struggle with perfectionism.  They struggle by trying to be more perfect, or chastising themselves for not being so.  They see not their beauty, function, skills but their flaws.  They let the flaws become the Big Story.

I remember a man I knew in Texas many years ago. He was a carpenter, and had a big anniversary coming up, so he made his wife a beautiful wooden hutch.  He prided himself on his skill of using only joinery in his work:  no nails or glue, just dovetails to hold the pieces in place.  Towards the end of putting together the back, he cracked off a dovetail, one of dozens that would bridge the back to the sides.  "I ruined it", he said.  He didn't see the hundred plus that were perfect.  He only saw the one that wasn't.

"Humans are always dissatisfied", my friend said tonight at dinner.  I told her about a chapter in Joe Quirk's book, It's Not You, It's Biology, titled "The Bitch Gene".  Quirk posited that humans, above other animals, have a huge portion of their brain devoted to problem solving and dissatisfaction, and that portion is directly responsible for our evolution.  We're cold, so we invent clothing and shelter.  We're hungry and invent agriculture.  Dissatisfaction keeps us moving forward.  But sometimes we outpace our genetics, and invent problems that aren't even there. 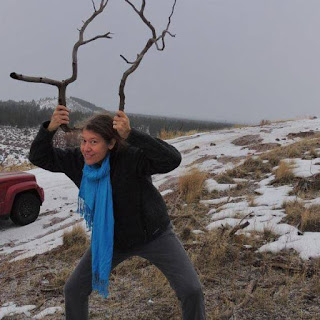 Many of the things we agonize about won't make a whit of difference in a decade or generation. Many of them are not even of our own inherent needs.  Americans live in a country that is based on capitalism, a system that relies on creating needs to insure prosperity and growth. That system also creates anxiety.  We are told we should and could be happier, be better if only we did/bought/had X.  It's important to challenge our narratives about whether we are "enough".  It's important to remind ourselves that even if we did get skinnier, wore the right clothes, got that promotion, did enough yoga we still will (hopefully) get older, and (always) will die.  How do we choose to spend our time?  Would it be ok to just be who we are, warts and all?

If we really could live by the Serenity Prayer-- changing what we actually can, accepting what we can't, and knowing the difference between these two things-- I'd be out of business as a therapist.  That isn't going to happen.  But I'd be happy if we tried.

Well said Jana. Remind me to show you a related sculpture I made which I think speaks to the same.