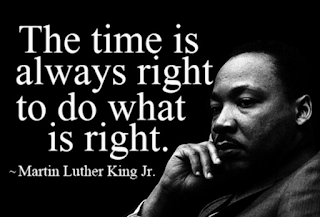 Today we honor the work of Dr. Martin Luther King Jr, with a challenge to stand up against injustice with love and strength.

In Virginia, tens of thousands of "Patriots" are gathering to their right to own assault rifles and semi-automatics.  Conspiracies are flying about a new civil war, about busloads of crisis actors and antifa dressed as MAGAs being protected by deepstate police-- it's all so batshit crazy that it would be laughable. 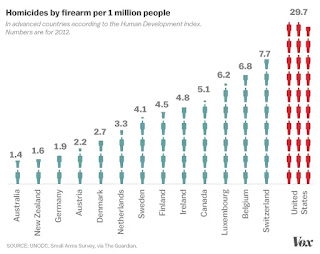 Except people die because of this rhetoric.

And in the United States, many more die than in similar countries.  Here, we have an average of 120 guns for every 100 people.  Considering how many people DON'T own guns, that means there are a hell of a lot of people stockpiling.

And we see the results of that every day in America.  A house full of ammo exploding in Hawaii after the resident first guns down two cops.   A bar in Texas, in California, in Ohio, in Orlando becomes a massacre site.  Churchs, malls, movie theaters, schools, workplaces have all been targeted.  Often the violence is racially motivated.

It's hard to even talk about sensible gun control-- registering, wait periods, no stockpiling ammo or home access to semi-automatics-- without NRA activists screaming about their rights and the second amendment.  Yet the vast majority of Americans WANT these laws.

The NRA was originally designed to teach firearm safety for hunting.  It's morphed into something far more political and scary, and the sad part is its members swallow it whole, even though behind the curtain it's all about maintaining that $52 billion gravy train.

Martin Luther King Jr was murdered by a gun-carrying "patriot".  A man of peace meeting a most unpeaceful end.

Your challenge, if you support changes to gun violence in America, is do something, anything, toward that end today.

If you're a gun owner, you can make sure your guns are kept in a safe, safety on, ammunition elsewhere.  Don't leave them loaded in your house or car if you're not with them at all times.  Don't carry them at all if you are untrained, impulsive, have a history of violence, are under the influence of substances, or are depressed (having a gun in the house drastically increases your chance of death by suicide).  If you hunt, consider training for a compound bow.  If you hunt with a gun, be safety-trained, and use a gun intended for a decent hunter, not something to mow down a crowd.  If you like to shoot, do it where it's safe and legal and not a disruption to other's peace.  Semi-automatics should be kept to shooting ranges.  We don't drive Formula 500 cars on city streets and highways, and we shouldn't be shooting massive rounds off into the woods.

Call your local, state and US representatives and urge the passage of uniform waiting periods and age restrictions.  Call your local department stores and urge them to stop selling guns primarily intending to kill people.  Support and give a shout out to those that do.

Don't argue with gun rights activists.  They won't hear you.  You can try listening deeply to them and ask if they'll do the same with you.  It make not change anyone's minds, but you never know.

If you just can't bear dealing with the gun violence issue today, here are some alternatives:

Learn more about how racial injustice continues to affect people of color in America in 2020.

Gather in community to celebrate the life and works of Dr. King.

Read or listen to some of Dr. King's speeches.

And most importantly, be a vessel of love, open-heartedness and deep curiosity  for understanding as you stand for justice.